skip to main | skip to sidebar

They look like little cinnamon candies here, but they're actually the most common type of blood cell in the human body - red blood cells (RBCs). These biconcave-shaped cells have the tall task of carrying oxygen to our entire body; in women there are about 4 to 5 million RBCs per micro liter (cubic millimeter) of blood and about 5 to 6 million in men. People who live at higher altitudes have even more RBCs because of the low oxygen levels in their environment. 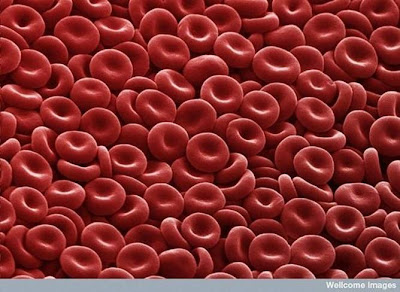 2. Split End of Human Hair
Regular trimmings to your hair and good conditioner should help to prevent this unsightly picture of a split end of a human hair. 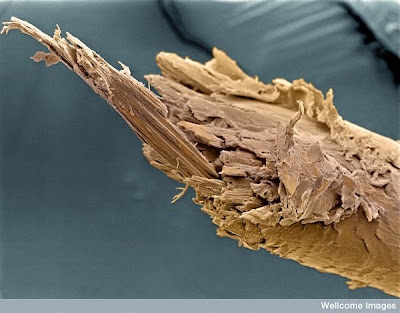 Of the 100 billion neurons in your brain. Purkinje (pronounced purr-kin-jee) neurons are some of the largest. Among other things, these cells are the masters of motor coordination in the cerebellar cortex. Toxic exposure such as alcohol and lithium, autoimmune diseases, genetic mutations including autism and neurodegenerative diseases can negatively affect human Purkinje cells. Here's what it looks like to see a close-up of human hair cell stereo cilia inside the ear. These detect mechanical movement in response to sound vibrations. 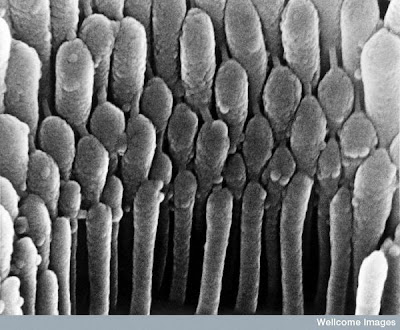 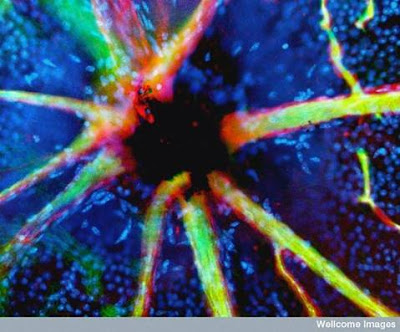 6. Tongue with Taste Bud
This colour-enhanced image depicts a taste bud on the tongue. The human tongue has about 10,000 taste buds that are involved with detecting salty, sour, bitter, sweet and savory taste perceptions. Thai people have very few -- most killed by eating spicy food. 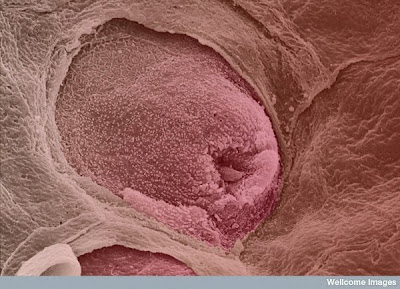 Bacteria on the surface of human tongue 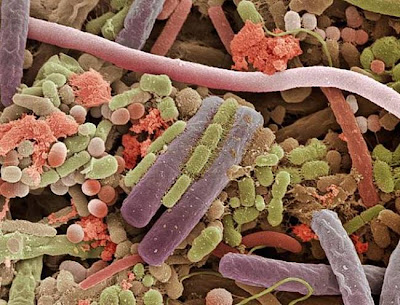 8. Blood Clot
Remember that picture of the nice, uniform shapes of red blood cells you just looked at? Well, here's what it looks like when those same cells get caught up in the sticky web of a blood clot. The cell in the middle is a white blood cell. 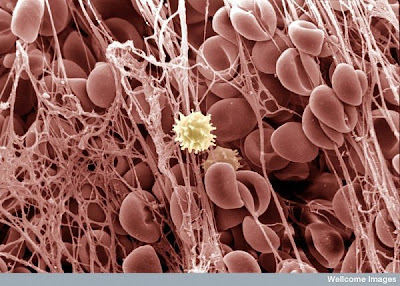 9. Alveoli in the Lung
This is what a colour-enhanced image of the inner surface of your lung looks like. The hollow cavities are alveoli; this is where gas exchange occurs with the blood. 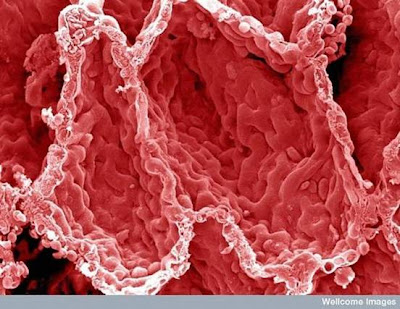 10. Lung Cancer Cells
This image of warped lung cancer cells is in stark contrast to the healthy lung in the previous picture.   Smoking can cause this. 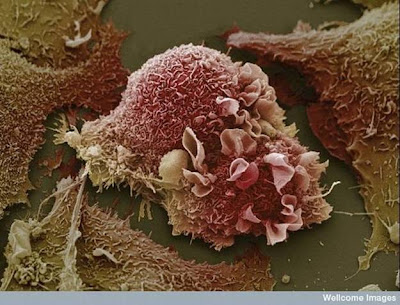 11. Villi of Small Intestine
Villi in the small intestine increase the surface area of the gut, which helps in the absorption of food. Look closely and you will see some food stuck in one of the crevices.   (Reminds me of the fried pig's intestine in porridge which I like). 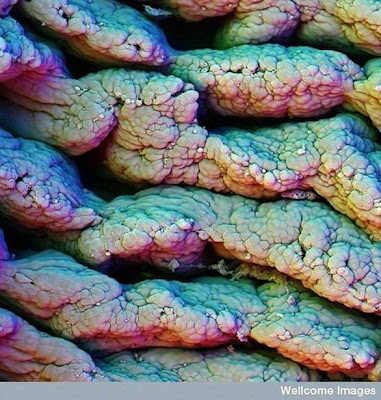 1) Female Human Egg with Coronal Cells
This image is of a purple, colour-enhanced human egg sitting on a pin. The egg is coated with the zona pellicuda, a glycoprotein that protects the egg but also helps to trap and bind sperm. Two coronal cells are attached to the zona pellicuda. 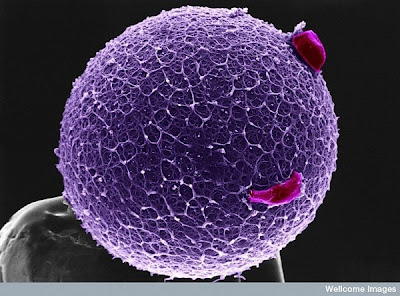 2)  Male sperm on the Surface of a Human Egg
Here's a close-up of a number of sperm trying to fertilize an egg. 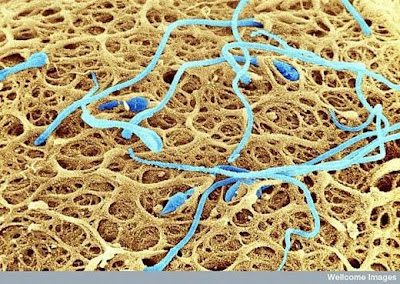 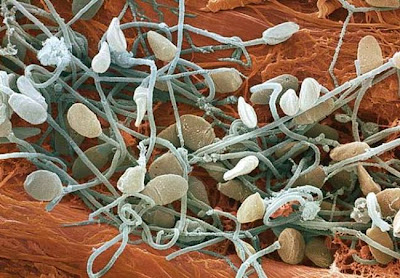 3)  Human Embryo and Sperm
It looks like the world at war, but it is actually five days after the fertilisation of an egg, with some remaining sperm cells still sticking around. This fluorescent image was captured using a confocal microscope. The embryo and sperm cell nuclei are stained purple while sperm tails are green. The blue areas are gap junctions, which form connections between the cells. 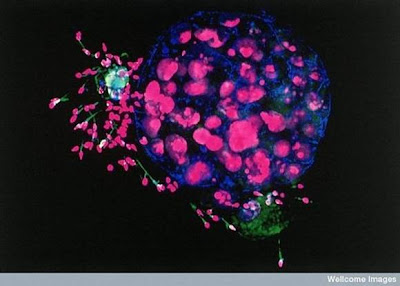 4)  Colored Image of a 6 day old Human Embryo Implanting itself onto the wall of the womb.  So everyone started out like this......and became beauties. 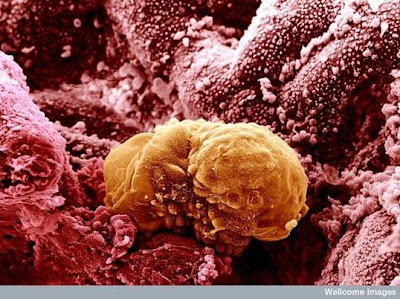 Nine months later if  pregnancy goes fine, you basically get this, but colour of baby depends on the parents. (Black, white, yellow, brown etc.) 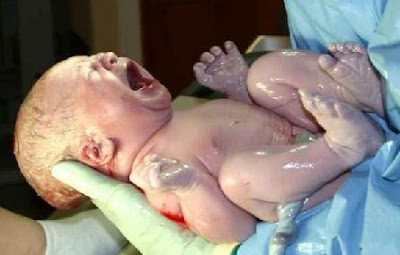 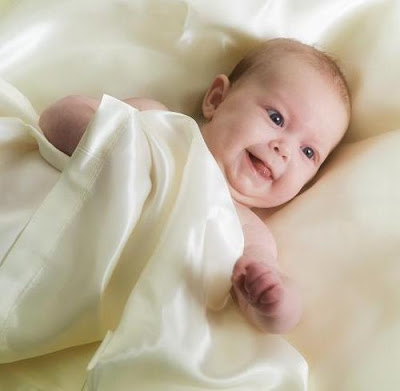 Unfortunately, some might turn out abnormal, no offence to them.  (maybe defective mutated sperm eg. 2-headed sperm or 2 tail sperm, or infected sperm).  Protect your reproductive organs - by healthy living. 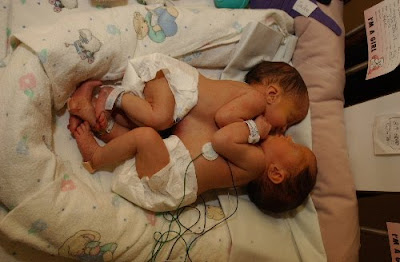 Eyelash hairs growing from the surface of human skin. 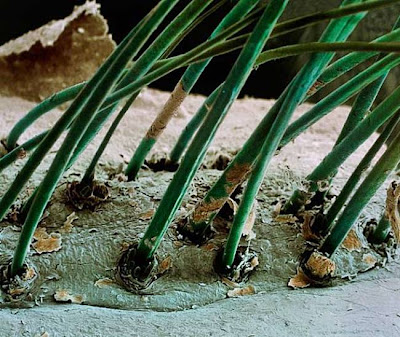 The head of a mosquito 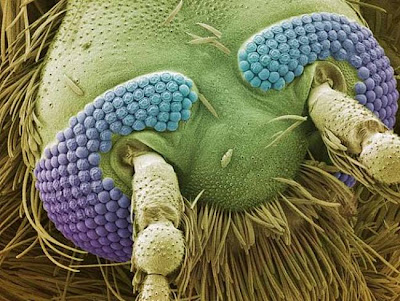 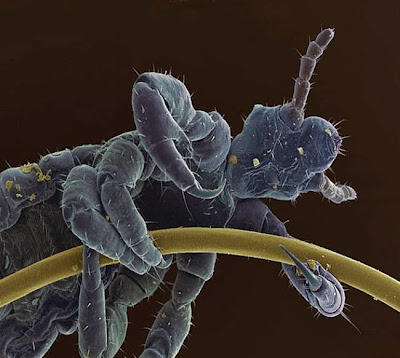 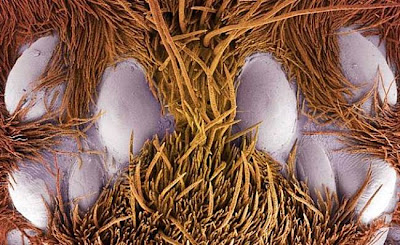 Clutch of butterfly eggs on a raspberry plant 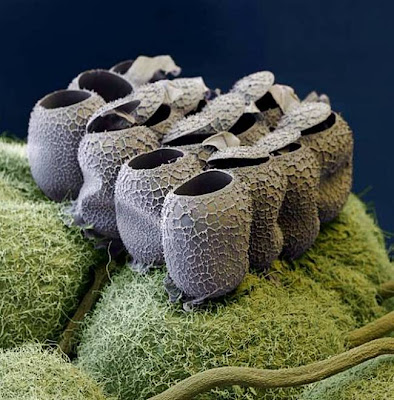 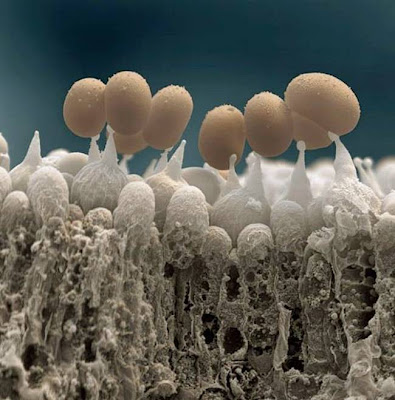 An ant holding a microchip 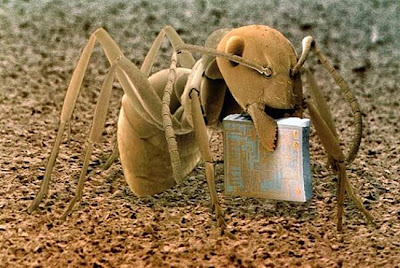 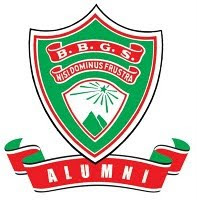